Divided we all fall 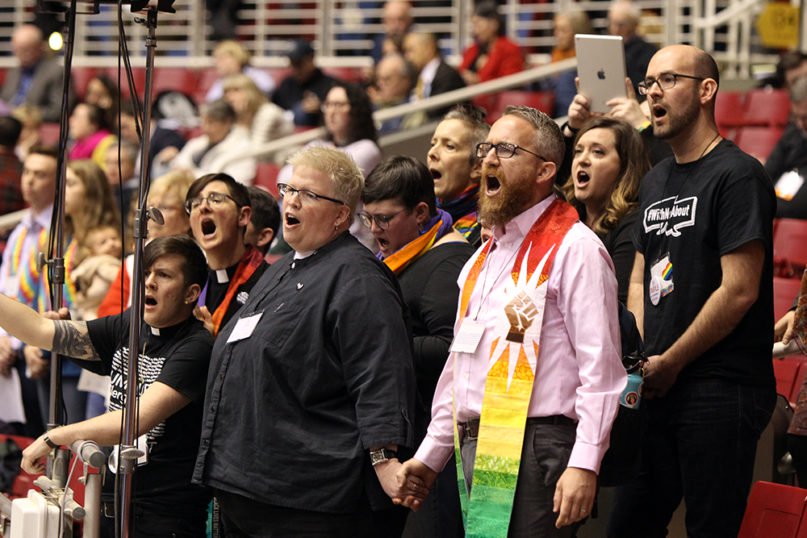 Divided we all fall

Heartbreak hit yesterday. Its aftershocks will affect us all, regardless of where you do (or do not) sit religiously.

On Tuesday, February 26, 2019, the United Methodist Church (UMC) actually did not unite. The mainline denomination fractured over the role of LGBTQ+ people in the denomination. At a special conference in St. Louis this week which convened to address divisions over LGBTQ+ issues, members voted to toughen prohibitions on same-sex marriage and LGBTQ+ clergy.

Many Americans in the denomination passionately pushed for a resolution that would have allowed local congregations, conferences, and clergy to make their own choices about conducting same-sex marriages and ordaining LGBTQ+ pastors. This proposal, called the One Church Plan, was designed to keep the denomination together. UMC delegates rejected their recommendations, instead choosing the “Traditional Plan” that affirms the denomination’s longstanding teachings against homosexuality.

While the UMC in the United States is divided almost evenly between those who identify as traditionalists and those who identify as moderates and liberals, this isn’t the case for the overwhelming majority of United Methodists living in African countries or in the Philippines. These arms in the denomination hold firmly to theological teachings against same-sex relationships and marriages.

This was a consequential vote for the future of the UMC. Many progressive UMC churches may now consider leaving the denomination. It’s also a reminder that many Christian denominations are still deeply divided over questions of sexuality and gender identity.

Some of the Methodist clergy I have spoken with say the denomination will come out all right, that a day of resurrection is still coming where unification will be achieved in God’s time, not theirs. Other clergy members are not so hopeful. In fact, they grieve.

For the non-churchgoer, this rift speaks to more infighting in the long-hit institution of religion. Why be a part of a church that is divided, and, as whole, chooses to remain this way? I can’t imagine membership in the UMC will rise anytime soon, or even maintain its sliding position.

No denomination is perfect. In fact, each still represents a location, a brand. As hard and as challenging as this may be, let the brand be unity. Can we stop this division, please? I speak to advocates in all denominations who seek the self-denying, service-invoking presence of Jesus in their hearts and in their actions.

We are only ‘one’ when we hear and hold in value someone else. The Apostle Paul speaks to this in Galatians 3:28. “There is neither Jew nor Greek, there is neither slave nor free, there is no male and female, for you are all one in Christ Jesus.”

Disagreements are not wrong. In fact, they are incredibly healthy when the outcome does not produce ‘winners’ or ‘losers’ but lessons of love, respect, differences, and acceptance.

You know this: sometimes it is necessary to part for a time until a resolution can be reached. Let the prayerful pray that this divide will not last, that UMC sisters and brothers from different locations (and, in fact, ALL sisters and brothers from different locations) can see the ‘other side’ and walk hand in hand toward understanding the love Jesus calls us to do is inclusive, not divisive. We who love Christ ARE one body.

Here’s the bottom line. Those who didn’t know of the UMC have caught a recent headline or two. As much debate hit the floors in St. Louis, so much more love needs to fill hurting spaces now. No one wins if one side is hurting. Churchgoers and non-church goers alike, love like Christ. To do so, listen to Christ. Let His healing, directive words bring us all together, not apart.

Social
« Remain in my love.
Turning memories into new miles »