Home / The blog hog / Emulate our Saints, not ignore them
‹Return to Previous Page 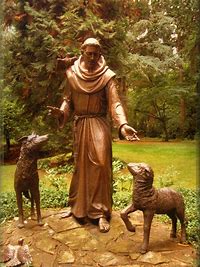 We shouldn’t rest though, at least not completely. Instead, we should be inspired, or, better, called into action. The action or origin behind All Saints Day cannot be traced with certainty but, according to Encyclopedia Brittanica, Pope Boniface IV formally started what would later be known as All Saints Day on May 13, 609 AD, the date he dedicated the Pantheon in Rome as a church in honor of the Virgin Mary and all martyrs.

This weekend, we have a chance to do more than dedicate. We can remember the saints of the past. We can reflect upon and reconsider past role models who, through perseverance, boldly made a difference in their dark and dreary world with an emphasis not on self, but on our Savior. Such devotion to the Christian faith may never make a national holiday these days, but that should not stop the Christian from using this day as a platform for what Christ himself taught, which is equality, justice, mercy, and, above all, a universal love of neighbor that eradicates any “us” verses “them” thinking.

All Saints Day matters. It should never be sequestered to any church (meaning it should never stay only within a church whose doors are far too often closed or just as sadly opened only one day a week). All Saints Day should have the freedom and the life it deserves so that freedom in this life and in the one to come is not just known, it’s acted upon.

Pope Gregory III (731-741 AD) dedicated a chapel in Rome’s St. Peter’s Basilica in honor of all saints on November 1. This celebration was originally limited to Rome. In 837, however, Pope Gregory IV extended the celebration to the entire Church. He ordered the official observance of All Saints Day to occur every November 1.

We should extend this celebration to the entire world. And this begins with us.

Jonathan Edwards propels this thinking. He once said, “The way to Heaven is ascending; we must be content to travel uphill, though it be hard and tiresome, and contrary to the natural bias of our flesh.”

I cannot ask Edwards what he means by the natural bias of our flesh, but suggest (or perhaps appropriate) that he means we Christians choose to cower and be comfortable more than walk uncomfortably alongside Jesus on His dusty road to Calvary. We are following one who died and, in so doing, we die (or should die) to our fear of fear itself. Perhaps the reason we are not more prominently advocating the cultivation of saints today is we espouse too closely to a passive rather than active God. When we say, for example, that “God’s got this” we are more apt to do nothing than to commander the spirit of a saint and stand up when wrongdoing occurs right before us.

According to some sources, the idea for All Saints Day goes back to the fourth century when the Greek Christians kept a festival on the first Sunday after Pentecost (in late May or early June) in honor of all martyrs and saints. Other sources suggest a commemoration of “All Martyrs” began to be celebrated as early as 270 CE. No specific month or date is recorded, however. Pope Gregory IV made All Saints’ Day an authorized holiday in 835 CE. It is speculated that the chosen date for the event, November 1, may have been an attempt to supplant the pagan Festival of the Dead (also known as Samhain or the feast of Saman, lord of death).

Halloween constructs its name from All Hallows Day, another name for All Saints. The root word of Halloween is ”hallow,” which means ”holy.” The suffix “een” is an abbreviation of “evening.” Halloween refers to the Eve of All Hallows, the night before All Saints Day. More than a thousand years ago, a well-received custom began with Christians in Ireland and Britain. Local church people gathered on the eve of the feast of All Hallows Day to ask for God’s blessing and protection from evil in the world. Participants would typically dress in costumes of saints or evil spirits and act out the battle between good and evil.

With so much _____ in the world, shouldn’t we gather to ask for God’s blessing and protection, too?

Earlier this month, I wrote a column about Halloween. I do not support this bewitching holiday. While cute and enticing to kids, costumes and candy, this day ultimately promotes evil. Wouldn’t it be amazing if Christians took October 31 to be a day to pray for God’s blessing and protection from evil in the world? Respond to the question. Say yes. If enough of us respond affirmatively then yes, like Pope Boniface IV, a new tradition can form. A good tradition. A necessary tradition. The National Day of Prayer would remain one event. While similar, this would be another.

Be saintly, or at least try. Why? Here’s our answer. Scripture informs us that the dead in Christ are alive. Nowhere does the New Testament teach us to ask for our intercession. Rather, it urges Christians to come boldly before the throne of grace (to God) knowing that we have a great High Priest, Jesus Christ, who forever lives to make intercessions for us (Hebrews 4:14-16, 7:24-25). We depend upon Christ alone for salvation (Acts 4:12) and upon Him alone for grace for Christian living after salvation. The Bible speaks of Christ being our one mediator between God and humankind (1 Timothy 2:5).

This blog was first published in The Susquehanna Independent on October 28th, 2020. Saint Francis of Assisi is depicted in this outdoor statue (pictured).

Social
« Christian passivity: turning peaceful to panicked
His mountain, not ours »