Having it well with your soul 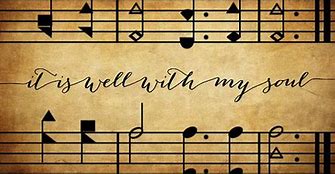 Having it well with your soul

If this title makes you think of hymn, It Is Well with My Soul, I already have your attention. If the construction of these words in this order is unfamiliar to you, ah, we have some work to do. This work, like any very, very good work, will take time. Don’t worry though. As you know—or as you’re learning—faith takes time, beautiful time.

This is not a lofty poet speaking. Consider any long-term relationship you have (or have had). Nothing substantially good comes simply. It certainly doesn’t come quickly.

Here at 1:18 AM, which is the time I am beginning this column this week, I am tired. Painfully tired. I will be awake before 6, and I know there are heroes out there who make it on far less sleep. And they, unlike me, won’t get a 20-minute afternoon nap.

I mention being painfully tired not because I want to whine, moan, or prove how hard it is. I’m actually going for the opposite here. Even in the midst of great uncomfortable circumstances, and we all find ourselves here, we can say with conviction that yes, it is well with my soul.

The author of this hymn, Horatio Gates Spafford (1828-1888), penned these longstanding, famous lyrics in 1873. To him, they were true. It was well—so very, very well—with his soul.

Spafford was a prominent Chicago lawyer who owned several properties in the city. He and his wife had four daughters and a son. Life was more than good. A man of faith, he would say his life was blessed.

Faith, however, is not synonymous with an easy, joyful life. Just as Horatio reached the pinnacle of his profession and financial success, he was hit with the tragic loss of his son. Shortly thereafter, the Great Chicago Fire destroyed nearly every real estate investment Spafford owned.

Spafford treated his wife and daughters to a much-needed escape from the turmoil a few years later. Shortly after the family vacation began, which was a trip to Europe by ship, he received a telegram from his wife. The ship wrecked. All four daughters perished.

Over the same sea that had just claimed the lives of his remaining children, Spafford, on route to rejoin his wife, put his pen to paper. The timeless hymn was born with the words: When peace like a river, attendeth my way, When sorrows like sea billows roll; Whatever my lot, Thou hast taught me to say, It is well, it is well, with my soul.

Hymn composer Philip Bliss (1838-1876) was so moved by Spafford’s prose that he composed a peaceful melody to accompany the words. Bliss and Sankey published the hymn in 1876.

Now 1:18 AM doesn’t seem so bad. But I invite us not to think what I regularly hear from my congregation, which is that, “Someone else has it worse than I do.”

We all can hurt, and we can all hurt deeply.  We can run out of steam, or, with a radically different energy, we can all hit the wall in front of us far too hard.

I am saying this. Pain hurts. It hurts for all of us.

A relationship with God, however, does not. This is not a slap-it-on platitude, especially for anyone in acute grief. This is just an honest understanding that we all come to in our own time when someone or something we love is gone.

Yet faith, when given space and time, is persistent. It finds its way to us again and again when we see beyond ourselves to our God who sent His Son to us.

Our power and fortitude should not become something self-generated; they never were supposed to be this way in the first place. Instead, energy, hope and life resonate through verses like the following from the Apostle Paul, who, like Spafford, also penned famous words. “I can do all things through Christ who gives me strength (Philippians 4:13).”

This blog first appeared as a column in The Susquehanna Independent on August 26, 2020.

Social
« hurt healing hugs
A Rod By Any Other Name »