Bounty in a boy’s basket 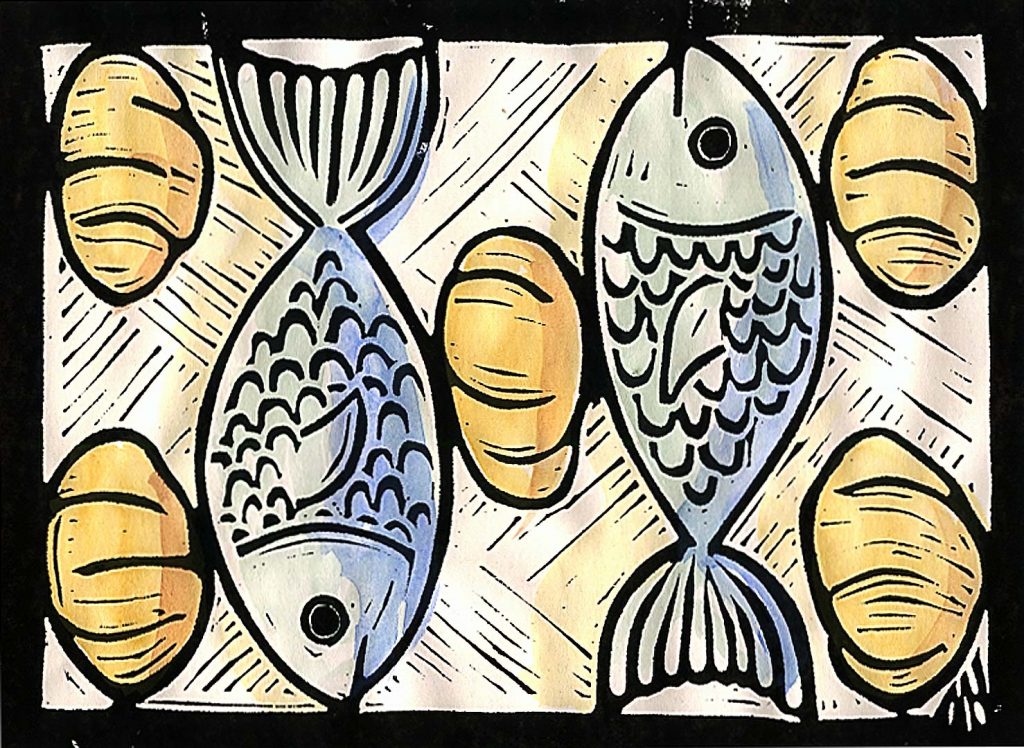 Bounty in a boy’s basket

A crucial moment in the story of the feeding of 5,000 comes with the question, “So how is everyone going to grab dinner?”

The disciples may have looked down with disappointment or dismay at the boy’s meager offering. Perhaps they were even baffled by it. After all, the tike was presenting only two fish and five loaves of barley bread to this massive crowd that scholars suggest may have totaled upwards of 25,00 people. And this Jesus-following crowd did not bring food with them to this rural setting. Nothing nearby could accommodate feeding such numbers.

But that boy stood there with what I picture to be a bright expression with unflinching eyes. He might have said, “This is what I have, Jesus.”

We do not know exactly what happened in the exchanged between Jesus and the boy. (His specific age is not given.) What we do know is this event is vitally important to Christianity because in Matthew, Mark, Luke and John, only two stories are found in the four gospels. The feeding of 5,000 is one. The resurrection is the other.

What is also significant is only John includes the detail of the boy. The other three gospel writers do not mention this, and John does not offer any detail in the exchange between Jesus and this gift giver. We are left to wonder what the two say to each other—if they share any words at all.

It is possible the boy never gets that close to Jesus.

This, however, is unlikely for two reasons. First, Jesus regularly uses everyday events as teaching moments. Second, Jesus was radically inclusive in his day. He called on the outcasts, the marginalized, and the unwelcome to receive his love, care and attention. This, of course, included children. No one should forget what he said in Matthew 19, Mark 10:14 and Luke 18:1, “Let the children come to me.”

Children help us understand Jesus because children, by essence, are innocent, curious, and trusting. They indelibly have what every adult Christian who follows Christ learns to have, and this is hope. Children also have faith in what seems impossible or unbelievable. Take it from the father of five young foster children who once wrote an entire column on their constructed and reconstructed belief in the Tooth Fairy. Children find it both easy and quite normal to believe in things they cannot see or understand.

I believe John speaks wisely. It is significant that a child provides the loaves and fish for the feeding of the multitudes.

Both loaves and fish are equally noteworthy. Let me start with the bread. The loaves reconnect those of the Christian faith to the wanderers in the desert who received daily manna from God (Exodus 13), Elisha’s miracle (2 Kings 4), and the provision of wheat for Ruth (Ruth 2).

This event with the boy’s meal takes place shortly before Passover. Afterward, Jesus teaches He is the bread of life who is sent from heaven (John 6:35).

A few chapters later, during Passover, Jesus and His disciples break bread together (John 13). While John doesn’t record the conversation where Jesus blesses the bread and the wine and institutes the Lord’s supper, the other three gospels do. Jesus, who shares with His disciples that He is the very bread of life, now breaks a loaf, blesses it, and shares it with them. Then He says, “This is my body, which is given for you. Do this in remembrance of me (Luke 22:19).”

After His resurrection, He provides bread again. This time it is after He walks the Emmaus Road with two disciples. The twosome does not recognize Jesus until they invite Him to stay the night with them. As he reclines at the table with them, he takes bread, blesses it, breaks it, and gives it to them. It is then that their eyes are opened, and they recognize him (Luke 24:30–31). The disciples race to Jerusalem to find the rest of the disciples, describing “how He was made known to them in the breaking of the bread (v.35).”

As for the fish, remember how a third of Jesus’ disciples made their livelihood. They were fishermen. After He calls them to follow Him, He teaches them how to fish for people. When the practice of Christianity was against the law, the early symbol used safely was that of a fish. This symbol is still in use today. I have even heard the saying, “You catch ‘em. He’ll clean ‘em.” (Hint: I am not talking about fish.)

I am talking about the boy though. The little guy didn’t say, “Hey Jesus, is it okay if I share just one fish and a couple loaves? After all, I’m a growing kid. And I’m ravished. And if you’re going to multiply it anyway, this is just a little bit more of a miracle for you. And being that You’re God and all, this is easy for You. Yes?”

Instead, he gave all he had.

Jesus did the same. With the innocence of a child, the young boy shows the same compassion for people as Jesus did. In dying, our Savior gave all He had to help us.

But we do know this is just the way God works.

And this, like fish and loaves, is always worth sharing.