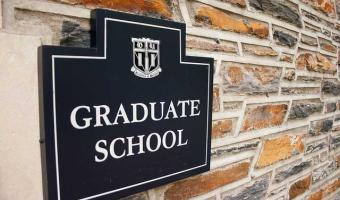 I thought the preacher speaker would get to us. Maybe we’d get a paragraph. Maybe a sentence or two. I kept on thinking this, even when the 30-minute speech should have been 20-minutes.

I’m talking about my doctoral graduation this past fall. The commencement address speaker apparently had a connection with the master’s level students. He spoke fondly of both them and some place they apparently experienced together. This place was never clearly defined to the rest of us, and I wasn’t clear if our speaker was a professor, which was not mentioned by the faculty member who introduced him at length, or if he held an adjunct role of some kind.

There were times some grads raised a cheer during the speech. It was good to hear a connection was made. It was also good to hear that our speaker spoke of the sacrifices the class had made during their arduous program.

I never heard the questions in my head, “When is he going to get to our doctoral program?” “When will he speak to us?” Instead, I just felt a heaviness. A disconnection. An unappreciation.

I thought something else, too. As the speaker kept on about the sacrifices required for the master’s degree, I looked around at those seated under the large tent we had all gathered under and considered grandparents and children, spouses and support systems. They sacrificed. They had nights when mom or dad wasn’t available. Spouses dealt with tired, over-stressed and short on time partners turned fulltime students more than once.

Excuse the time I’ve taken to make this important point. Include people. Consider everyone around you. One of the best benefits of a pastor like me sitting still for that 30-minute speech was that I could experience again what it is like when I stand and others sit. To use pastoral imagery, I wasn’t a shepherd that time. I was a sheep.

If any upcoming speakers are reading this, or if I have a pastor’s attention now, I want to share some of the best advice I received shortly after I began my first fulltime position as a pastor (which happens to be the same position I have now). A senior whom I would not define as particularly worshipful said, “Talk to us.” He added something equally valuable. “Talk about us.”

Oh, advice of gold! He is right. People want to be spoken to, talked to, understood, and, above all, included.

Hush if you think this is another piece on why every nine-year-old should get a trophy at the end of the sports season; this is really about all of us—each of us—going that extra step to be inviting, appreciative, attentive, nurturing and nourishing.

It has been six months since that graduation. If I still remember the unsettling feeling that afternoon in my cap and gown with my family around me, and I’m not going to call myself a sensitive type to this, then when Jesus calls us to fish for people, he isn’t just asking us to yap it up with just our besties. Jesus calls us out of our comfort zones.

Nothing I am saying here is new. A fresh spin on a well-versed topic isn’t in this column. It’s just a reminder. All Christians are being watched these days, not just certain ones. We are being targeted, questioned, and even maligned. I don’t think this focus is dire or damaging if it challenges us to carrying gospel truths in both word and action. Are we exclusive, or, more to the theology of Jesus, are we inclusive? Let me be clear. Jesus pointedly excluded the scribes and Pharisees. (Please refer to all of Matthew 23). He obviously excluded certain ideas and beliefs. But this exclusion never meant that he didn’t invite all. Above divisiveness, which I think we’ve all seen too much of lately, I rest my stance on inclusivity with the encouragement Jesus makes to go after the lost sheep (Luke 15:4-7, Matthew 18:10-14).

Our commencement speaker advertently or inadvertently did a great job. The way he went about it may have been his point. It is not about you, your praise or your worth.