Merry means more than one 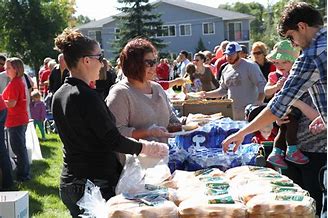 Merry means more than one

Yes, you have had and will have a beverage of choice by yourself and be fine with it. You can even eat alone and be okay with this, too. Sometimes quiet is nice! But to eat, drink, and be merry? That third part there—the merry part—yeah, no one is merry by themselves. We can be content, relaxed, introspective, maybe even rejuvenated alone, but being merry is a team sport.

Jesus is telling the crowd about a rich man who owns a fertile farm that produces an abundance of fine crops. There is so much bounty that storage becomes a problem. To solve the problem, the blessed entrepreneur tears down the barns he has to make larger ones. He thinks these mega wheat houses will be the answer.

They are not, according to Jesus.

Did the rich man pause for a moment when his first barns were knocked down? Did he think he had enough with what he had and that the rest could go to those in need? Did he dream for a second and think with these larger barns that he could feed hundreds of people not once but through lean seasons?

“Well, the hungry need to learn for themselves.” That’s a common thought among some. After all, good Americans are about helping up, not handing out. Enabling? Allowing for lazy behavior and bad decisions to continue? Well, that’s wrong!

And the success of the rich man was due to his own ability, right? His own gumption? You work hard and you get great results.

Let’s get back to the merry part in all of this. Jesus is right. To be merry, share not hoard. Give not guard your goods from others.

PRAYER: Lord, help us learn and show what it means to eat, drink, and be merry not alone, but in service to you with love to you not alone but with others. In your Kingdom’s name we, together, say, “amen.”

Tags: merry is a team sport