Beyond Cronkite: a new way of looking at an actually very old anchorman

Home / The blog hog / Beyond Cronkite: a new way of looking at an actually very old anchorman
‹Return to Previous Page 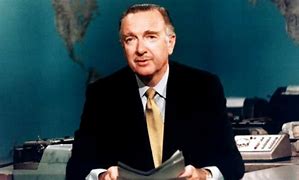 Beyond Cronkite: a new way of looking at an actually very old anchorman

Walter Cronkite was the Dry Guy on TV when I was a kid. By no means is this a slight or slam to this renowned TV anchor. It’s just that as a boy growing up, Mr. Cronkite was never theatrical or, more importantly, divisive. Certainly, he wasn’t polarizing. Without rose-colored glasses or revisionism in the face of continuous news feeds from today’s TV news personalities, I don’t think “selling the news” or “slanting the news” was ever close, or even imaginable, in his professional work ethic. When he signed off each broadcast with, “And that’s the way it was,” I believed him. What he said, and, most importantly, what he represented (or I should say embodied), was the news of the day. Period. No fluff. No slant. No agenda. No news selling. Certainly no sensationalism. Just. The. News.

As a boy himself, Cronkite landed his first job. In 1925, at the age of nine, he peddled the Saturday issue of the Kansas City Star on the streetcar lines for a net profit of 10 cents per week.

In 1950, CBS hired Walter Cronkite and quickly discovered his talent in front of the television camera. There he became a news reporter for the Washington, D.C. area. His career expanded when he became the host of the CBS morning show. The lead reporter in the 1960 Olympics followed. As a participant in many other news and documentary projects, people both inside and outside the CBS realm began calling him an “anchorman,” a term which did not even exist before Cronkite came on the scene. In some countries today, news anchors are referred to as “cronkiters.”

Cronkite’s most famous role came in 1962 when he became the anchor of the CBS “Evening News,” a 15-minute daily broadcast. At that point, television was still a relatively new medium for news delivery, and the Evening News benefited from having to compete with only two other networks. Within a year, the program expanded to a 30-minute format. This allowed for considerable depth of journalistic analysis and detail.

Through the 1960s, Cronkite’s popularity coincided with the sheer quantity of headline news that he reported, including the 1963 assassination of President John F. Kennedy, the Cold War, the Civil Rights Movement, the war in Vietnam, and the space race with the Soviet Union. By the 1970s, Cronkite had earned the nickname, “the most trusted man in America.” This title was due in no small part to his reporting on the Vietnam War and the Watergate scandal (Source, the Kansas City Public Library).

Television is no longer a new medium for news delivery. This is a tragedy. 24/7 news stations carrying a political bend wound the very fabric of the news industry and, far worse, our nation. You can say that what I just shared is an opinion. But when we look at politics in particular, isn’t everything an opinion these days? Or it’s an opinion, that is, a wrong opinion, when ‘the other side’ speaks.

When I think of an anchorman, I think of our anchorman, Jesus. Of course, when we think of this literally, we realize the obvious: anchors weren’t always TV personalities. They were the very things that kept boats from drifting too far.

Though his nautical theme was prevalent, Jesus never wanted us to drift. Preferring a few fishermen for his crew along with boats, nets, seashores and stormy seas to float his story, the sawdust breathing, land-loving carpenter’s son ironically didn’t use carpentry metaphors in his ministry until almost the very end of his ministry. He saved the best for last. The only iron used with wood defined his complete ministry there on the cross.

Consider this anchorman—or anchor—named Jesus. Speaking of the world to come, he told it like it was. Now Jesus was indeed passionate, oh yes. He was even angry in the story of the money lenders, but he wasn’t gimmicky. He wasn’t popular, per se. His healing miracles drew the massive crowds not his message of salvation. He certainly held his great audiences for a time; we cannot forget the feeding of the four or the five thousand; but, at the time of his death on a cross, his only onlookers were blood-curious spectators and a handful of followers. Even fewer were involved the morning the tomb was discovered empty.

What I pray we all remember during these days of American unrest, divide, hurt and what appears to be a distance from healing and wholeness is this: we have an anchor. Cronkite may well have been dubbed the most trusted man in America, and I am not questioning this, but Jesus was (and is) the most trusted anchor ever. Period. And this period, this punctuation mark, is not the end of the story where the cameras stop rolling at precisely 7 PM in a network news studio. This continues. This continues because this is not the end of your story because you, too, have an anchor.