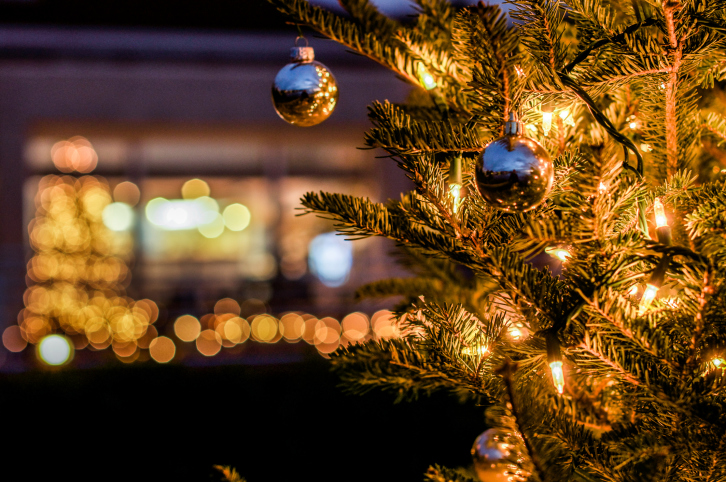 Christmas lights hold a romantic aura about them, (even to the curmudgeon who will NEVER admit this). A sense of peace, nostalgia, joy, or even a hot cocoa high of happiness happens when we pass decorated homes with stately white lights, colorful combinations, thoughtful or even funny themes, or a hodgepodge mix of whatever comes up from the basement or down from attic.

You may have noticed something this year. Something is different. Something is better. Maybe you’re noticing what my kids and I are in awe over—and that’s just how special, how beautiful, and how important the Christmas lights are this year. Yes, to be sure, the magic of Christmas through a child’s eyes is always outstanding—even contagious—but this year especially, the twinkling, shimmering, sparkling, dazzling or gently glowing lights on homes, bushes, trees and other outdoor Christmas decorations carry an even more important and necessary message this year. We can light darkness. While we literally can’t smile at one another out in public or down an aisle in a retail store, and this is a significant loss, we can let the passerby know that Christmas, yes, Christmas, the Grand Champion of all-American holidays, is here. Light and love are with us. The arrival of God on earth wrapped in human flesh resting or cooing angelically in a feeding trough surrounded by tremendous (and tired) parents and a ragtag crew of Shepherds is here. And this? Oh, this matters.

I mentioned my little elves, the children. The five are all under the age of seven. Coming home from Montrose one evening, it was totally appropriate to say this single, meaningful word when we passed a lit home, “Christmas.”

Speaking of Christmas, Brandon Stephens is the president of Christmas Décor, a professional holiday decorating company. He shared a telltale fact about our need to deck the halls this year. Compared to last year at this time, he said the company’s sales have jumped 15% to 20%. In 2019, the company’s franchises serviced more than 43,000 homes and businesses around the country. This year Stephens projects the number will jump to about 52,000.

According to an Associated Press article by Leanne Italie that appeared in the Columbia Basin Herald on November 18, Jacob Pinkham and his wife had a hard and fast “no-Christmas-’til-December rule”, that is until this year. Amid pandemic fatigue, election turmoil and the economic devastation hitting millions around the world, they did what so many are doing around homes near yours—they’re decorating.

The California couple rekindled memories about a Christmas trip to Cork, Ireland, a few years ago. If we thought we Americans had the spin on Christmas, ha, those Irish, the couple learned, have a tin soldier triumph, an all-Christmas radio station called Christmas FM. They’ve been listening to this music for weeks now, Pinkham told the Associated Press. He added, “Our daughter was born just before COVID hit so having to deal with being a new parent, a new family and with a highly contagious virus circulating, we decided we needed some Christmas cheer earlier than usual. “We also have two dogs. I don’t know how they feel about the Christmas music but they’re not barking, so that’s a positive sign.”

Our losses turn us to the lights. One loss on the opposite coast of California happened this year at Boston’s Faneuil Hall Marketplace. The New England icon didn’t put up its traditional Christmas tree, and organizers have cancelled what would be its 10th annual Blink! lights display.

In 2016, Smithsonian Magazine published an article, “Untangling the History of Christmas Lights,” writing that “when Thomas Edison patented the light bulb in 1880, its exact value was hard to gauge for this obvious, candle-lovers reason: widespread electrification was by no means common. Nevertheless, Edison and others invested $35,000 and created the Edison Lamp Company to sell the bulbs.”

The Smithsonian Magazine report also shared some fa-la-la fun facts: In 1900, a string of 16 flame-shaped bulbs sitting in brass sockets the size of shot glasses sold for a hefty $12 (which is around $350 today). Speaking further of dates and of cost, President Cleveland initiated electric lights on the White House tree in 1894. By 1914, a 16-foot string cost just $1.75. By the 1930s, colored bulbs were everywhere.

Keep those bulbs everywhere, and please keep them lit. From a van driver with five little darlings, I want to say something from all of us bright light fans, and it’s this. Thank you.